Technical analysis of the Renault RS19: a new step forward 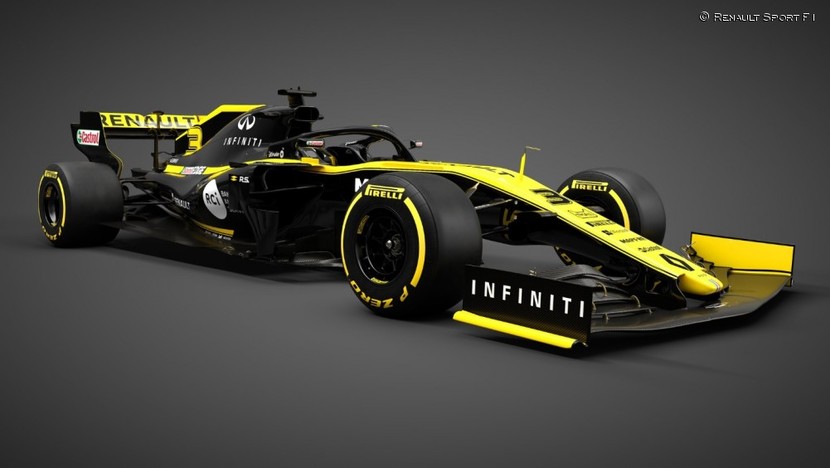 Renault RS19 is the F1 2019 single-seater strong> that has played present today. The new Renault car seems a step forward, but we will have to wait what they have done with the engine. So far we have only heard the motors of the bikers in the promotional videos that they usually do at this stage of the season for fans to hear the sound, but from there we can not know much of the power they will have and we will have to wait for them. last days of the pre-season tests at the circuit of Montmeló, in the northeast of Spain ...

Honda and Renault, Renault and Red Bull have been protagonists of a soap opera of accusations and ads that looked like smoke bombs rather than realities about their engines. In a few days we will see who has lied and who has told the truth, although I get the feeling that it is a cluster of alleged falsehoods (pure marketing) by both parties and that it will not be so much or so little. 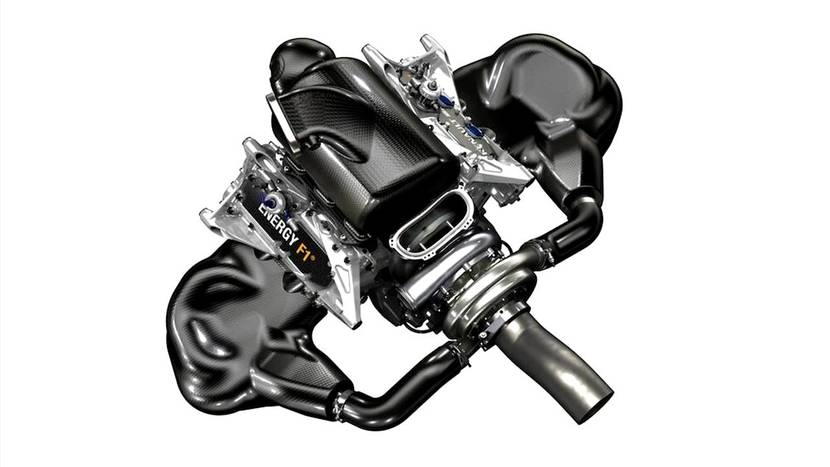 Red Bull had an announced divorce , the declassifications between both and the tension was evident, and with Honda in Toro Rosso, everything was a nice new fondness with the Japanese engine. Renault activated the alarms to defend themselves and began to announce with great fanfare the great advances they were making and how wonderful their engine will be for this new season. A battle between the announcements of Honda and Renault on their advances happened. How much of that is true? Will Red Bull have the same patience as McLaren if the Honda engine does not work? I insist, they are very interesting things because of the fight not to be the worst engine of the grid.

I'm sure that both engines, Honda and Renault, have advanced in power and reliability , I have no doubt, and surely have implemented a Q Mode to give more power in the classification as already They did last year but it did not contribute much. But more than the battle between both, what would be very interesting is to see how far they advance with respect to Ferrari and Mercedes, and it would be nice if Ferrari and Mercedes had already reached a ceiling and Honda and Renault are close and are very even this year , because that means more battles on the track.

Beware of reliability issues, as Renault has announced that not only the car is new to 99% , but this year's engine is completely new . If that is true, beware of architectural changes if there have been, because this directly affects the reliability of new parts not tested on track, only in the dyno or test bench of the respective factories. We already saw what happened to Honda every time he changed the engine with McLaren, another year thrown in the trash and start from scratch with everything ... Although, as always, you have to take the statements carefully, and more in F1 where today they say one thing and tomorrow the opposite.

The reason it is new is that the SPEC C that they presented last year was a bit of a failure, although they announced it as something very good and a very interesting step forward. But right off the bat, the same ones who said that, now say they changed everything because the SPEC C had some structural limitations of the engine did not allow them to extract more performance. The main objective is to get more ICE performance, since the ERS is pretty squeezed as they say. 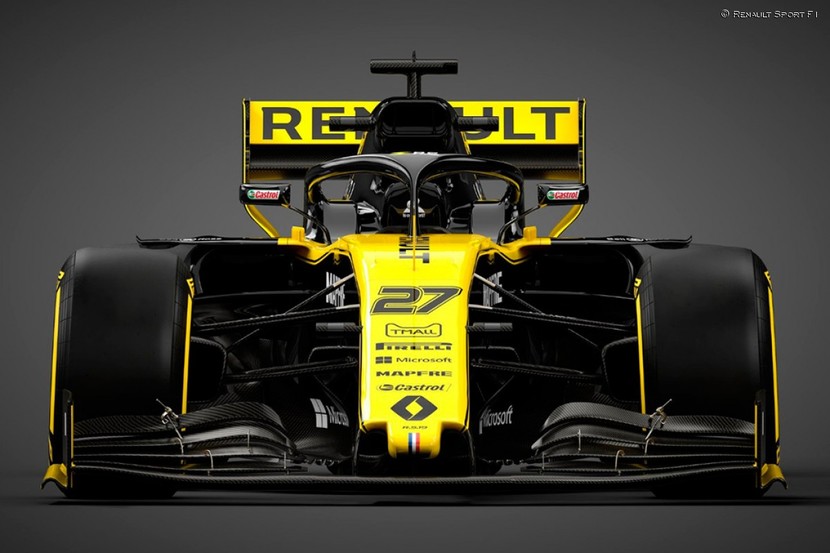 Little to say more of the front wing of this car that has not already said in the previous analysis.In addition, the wing already know that grows in width to occupy the entire width of the car and all deflectors or generators of vortices from the ends of the spoiler, which cleared the air that hit the front tire and generated a series of air flows with high energy to seal the flat bottom, now they disappear.

In this case, the main plane is quite straight (rises slightly on the sides), like Haas and Williams, and nothing to do with the curve we saw in Toro Rosso and none of those deflectors under the wing of STR14 that should be illegal in principle. What is very interesting is that unlike other front wings of the already seen, that the highest area is the outermost or near the ends, in the case of the RS19 the highest area is closest to the center (with those five elements) and they go down doing that curve as we approach the endplates. 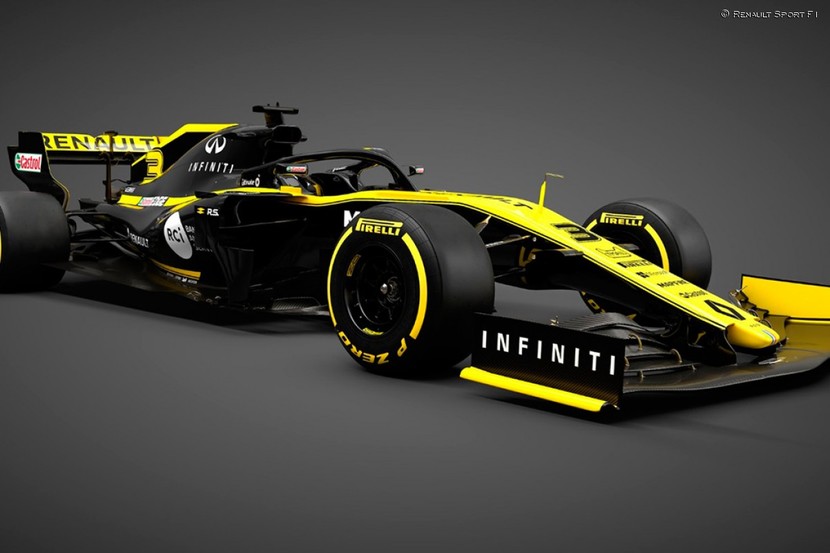 From this perspective you can also see the brake lines , simple but quite large and with a quartered shape. And we also see that the nose has not changed, it still has the typical nose with the two side channels to let pass greater air flow back and adapt to the regulations as we have been constantly repeating. And if you look at front/side photos, there are also some holes under the nose like those that McLaren had and many other cars but without the presence of S-Duct on the nose, which could simply be a few cooling sockets for the ECU or electronic control unit that is heated.

From the front/side view it is also appreciated that like Toro Rosso and as Ferrari did in the past, they have copied the solution of the supports with those holes or gills of the nose that McLaren devised to generate a few concrete air jets and in some way contribute to the air that passes under the wing by the two clear profiles of the sides of the tip of that nose. By the way, I take the opportunity to add that there is no presence of profiles on the halo as there were in the Williams. Will they ride them as the preseason progresses? We do not know, but last year in the presentations were all clean and then many mounted them.

By the way, the airbox is very small as we saw in the RS18, something that contrasts with what they have done in the past that enlarged it a lot to place there the radiator intakes of certain elements (ERS, oil tank of the gearbox, Intercooler and the own intake of the engine turbo). But in this case it has closed quite a bit, and it has the same oval shape (almost squared) of last year. However, when the intake of the airbox is smaller, the pontoons are usually somewhat larger, because those radiators or tubes that feed them with fresh air can be moved from one place to another as appropriate for the design or concept sought. 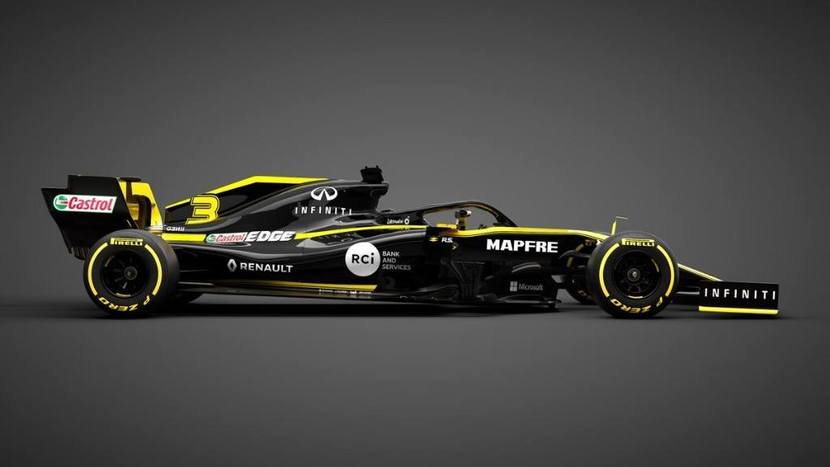 The side view leaves some interesting data, such as that huge rake on which this car is based. As Red Bull, McLaren and Ferrari, among others, already did, it seems that it is an interesting solution to leave a greater channel in the diffuser. However, many wondered if this technique was adequate or maybe it was "exhausted" to see how Mercedes performed, which was the team that has not joined this fashion and has created a fairly flat and level car in terms of axles .They have followed what seems already a trend in these cars, raise the shots to the maximum and narrow the lower area of ​​the pontoon that joins the flat bottom to leave two large air channels that resurface towards the rear area. In addition, the aerodynamic profiles attached to the sidepods also follow a philosophy similar to last year, although they have been remodeled and there is still a great complexity if we look at the area before the flat bottom in this middle area. You can see it better in the following image ... 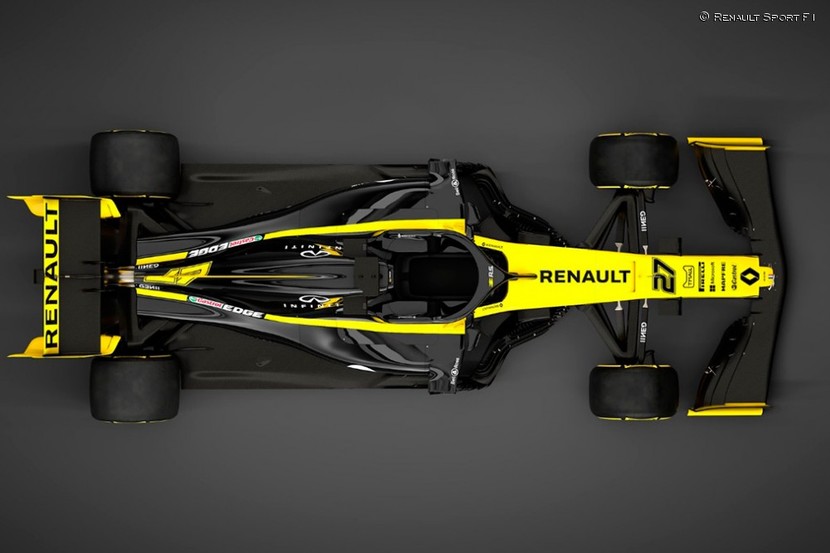 We see that on the pontoons there are horizontal wings that I see also in other designs such as the Toro Rosso and that have already used in the past others as Red Bull. Renault now joins this design that is somewhat different from Ferrari and has also followed this year Williams. As for the silhouette that the pontoons follow, it has been sought to stylize it and slim it down quite a bit in the rear area as usual, with a very tight rear area and leaving a large space in the area of ​​the flat bottom for letting more air pass through to that high area of ​​the diffuser and help extract air under the floor as we have already commented in other analyzes.

The flat bottom is strangely simple, just with some sizes or molded in the fiber but without the typical gills or cuts that usually have all the designs. Perhaps they are reserving those advances not to show them or maybe they will not implement them ... And we ended up with the rear wing, with two central supports and a horizontal profile, a mini wing of T as they already had many teams last year. A rear wing that seems quite large in the photos and that is quite conventional as the Haas, very straight and without anything flashy. As for their endplates, they are simple without profiles in their outer zone and only with those cuts that made McLaren fashionable in the back area. No gills in the high zone that, as I said, should be prohibited. But we saw them in the Williams, like those profiles under the Toro Rosso wing that also, in principle, is limited by the new season ...

Again, no trace of the diffuser in the photos. We will have to wait for the tests to obtain images ...